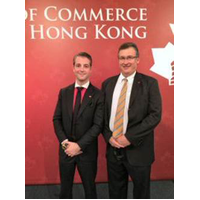 With the 2022 Winter Olympic Games in Beijing not far away, China’s goal of building ice hockey rinks and expertise in the sport may be realized with assists from two Canadian companies based in Hong Kong.

The companies – CTC Group Ltd and IJW Dorweiler Ltd – are working together to help fulfill Chinese President Xi Jinping’s goal of having 300 million Chinese people participating in winter sports before 2022. Among the key deliverables of Beijing’s Olympic plan to become proficient in ice and snow sports is to build 1,000 new ice rinks across the country.

For its part, Hong Kong-based CTC is a leading provider of winter sports and leisure facilities, from ice rinks to winter theme parks. It has been involved in winter sports-related projects in Asia since 1999.

To date, CTC has built the rink facilities at the 18,000-seat Mercedes-Benz arena in Shanghai, and completed more than 100 projects across Asia, including Hong Kong’s MegaBox and Singapore’s JCube rink facilities. Three to four additional projects to build sturdy “Canadome” arenas on the mainland are now in various stages of early development, according to Mr Fong, who added that five or six of the domed structures are in advanced discussion stages.

“We’d like to build around 100 rinks by 2022,” he said, adding the facilities could vary in size, from Olympic-sized rinks to smaller skating surfaces. While optimistic about hitting the century figure, Mr Fong is also realistic about the challenges CTC faces over the next six years. “Getting land anywhere is tough, and you need approvals,” he said. “Getting the right investors is also very important,” adding that most investors are from the mainland and Hong Kong.

While CTC mostly provides the hardware for the China initiative, partner IJW Dorweiler (IJWD) brings the software. IJWD is the Hong Kong subsidiary of two leading M&A and valuation boutiques based in Canada: Dartmouth Partners Ltd and IJW & Co, Ltd. Opening its office in Hong Kong in early 2016, IJWD is involved in several Canada-Hong Kong-China business-related pursuits, one of which is seeking to grow hockey at the grassroots level in China. They are doing this by focusing largely on developing China’s hockey content through universities, high schools and youth programmes, including Canada-China tournaments and exchange programmes. The strategy is to use the Canada "brand" as well as Canadian talent, such as certified instructors, coaches and referees, to help popularise hockey on the mainland, while teaming up with rink builder CTC.

“It’s an exciting project,” said IJDW Managing Director Drew Dorweiler. “Hockey now is largely unknown in China. It’s not developed and largely it is expats who play. For about 1.4 billion people, there are maybe only 15 NHL- or Olympic-sized rinks in the whole country.”

Build it and They Will Come

International hockey can be a daunting prospect for nations new to the sport, facing established powerhouses such as Canada, the United States, Russia, Sweden and Finland. Nations will ice men’s and women’s Olympic hockey teams, and China will receive an automatic entry because it is the host. This can be a double-edged sword – no host wants to be embarrassed, and lopsided scores at the international level happen; during the women’s teams’ qualification for the 2010 Winter Olympics in Vancouver, Slovakia defeated Bulgaria 82–0.

“To be successful, it has to start at the grassroots,” said Mr Dorweiler. “It’s about teaching youth to skate and love the game.” Mr Fong applies a philosophical slant to this idea. “I think the saying is, ‘once you build it, they will come,’ ” adding that CTC is well-positioned with IJDW to be the drivers of getting China to embrace hockey.

Hong Kong is home to a large Canadian business community. As of 1 June 2015, there were 18 regional headquarters and 31 regional offices of Canadian companies in Hong Kong. Canada was the 10th largest destination of Hong Kong’s outward foreign direct investment, with a stock of US$9.5 billion as at the end of 2014. Meanwhile, Canada has a substantial investment in Hong Kong, totaling US$5 billion as at the end of 2014.